Skip to content
I ordinarily have to force myself to get my western civilization reading done.  Today was no exception.  History will never excite me as much as its art, or learning about how we think, or even how to account for depreciation of assets.  Yet while trudging through the text today, I was reading about the Islamic infantry troops called Janissaries which consisted mostly of Christian boys that were recruited and raised to be Muslim and a part of elite military troops.  Which probably has a lot to be said about it but that’s not what caught my attention.

It was this line instead, “It was thought these troops would be extremely loyal to the sultan and the state because they owed their life and status to the sultan.”

How did they know that this status was so valuable that they would sacrifice their life to it?  Exactly how are powerful are the cultural standards that flood our vision and deafen our ears? Can they really convince us that there is some level we need to achieve and that it is worth every fiber of our being?

Yes.  They can and they will because they are sneaky.  No one hands you a slip of paper with rules and regulations for fitting in with this world.  Its not just from the magazines and TV and billboards all though those are certainly deserving of the criticism they receive for creating impossible ideals.  The thing is, those wouldn’t exist if we didn’t want them to.  They only work because we respond to them.  We want something to affirm us or deny us but either way give some stability of what is right.

It doesn’t have to be a negative thing.  We simply intrinsically gather information from the people and things around us to help us know what is valuable and true in this world.  Look around yourself.  What are your surroundings?  Who is around you?  They might not define you but they will create the definitions that you use to label yourself with.

If there’s anyone who can handle anything, it’s Chloe. She had a heavy volume of work, but quickly found ways to automate most of her tasks, without sacrificing quality. She’s extremely kind, bright and efficient. 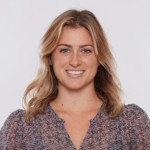